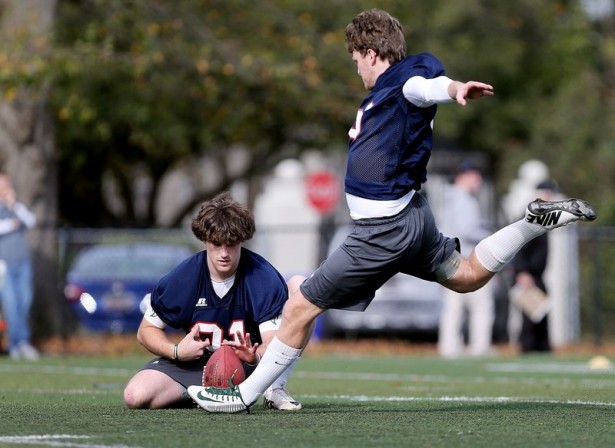 On the night of Nov. 1, Alabama-Birmingham kicker Ty Long made a 24-yard field goal with three seconds left in the game, lifting his Blazers to a 31-28 win over Florida Atlantic.

It was a great night for the Blazers, their fifth win of the season pushing them closer to their goals of a winning record and a bowl game after the team went just 2-10 in 2013.

It was the first serious indication for Long and his teammates that their football program was in immediate jeopardy.

“We had no idea what was going on,” Long said this week. “We were like, ‘What is he talking about?’ But Roddy knew a lot of stuff before we did.”

As it turned out, White was right; UAB shuttered its football program on Dec. 2. The Conference USA school became the first FBS school to drop football since Pacific in 1995.

That means that at the Medal of Honor Bowl on Saturday, Long and UAB teammates J.J. Nelson and Hunter Mullins will be among the last Blazers to wear a UAB helmet in a game. It’s something they don’t take lightly.

“The hard part is, we feel like (the administration) doesn’t want us there,” said Long, a senior from Roswell, Ga. “But we are going to make it clear that we are still here. I’m proud to say I’m from UAB and proud to wear that helmet this week. We want more people to know what happened and for people to support us.”

As rumors around the program grew during the season, the players began to feel they could save Blazers football if they could win enough games. The Blazers defeated Southern Miss by 45-24 on Nov. 29 to win their sixth game and become bowl eligible for the first time in 10 years.

“That was a weird feeling,” said Mullins, a senior punter from Tallassee, Ala. “Everybody was jumping and down, excited because we had won our sixth game. But I was thinking, is that enough? I didn’t know if it was enough to save our program.”

The Blazers did not receive a bowl invitation, and that Southern Miss game turned out to be their last – maybe ever.

“The season went really well,” said Nelson, a senior receiver from Midfield, Ala. “We wish we could have won a few more games, but coming from two wins, we could not have done much better than we did. I guess it wasn’t enough.”

In the weeks since the program was disbanded, many UAB players have found new schools to attend, but coach Bill Clark has yet to find a new job.

“A lot of guys have found a spot to play, but some have not and that’s what stinks,” Long said. “It’s hard to see guys you played with, guys you are friends with, and now they are struggling.”

Newspaper reports have questioned the financial numbers UAB used in dropping football, and many in Birmingham rallied to the Blazers’ support.

“The response has been awesome,” Mullins said. “It shows that people see the work we put in. I think a lot of UAB fans are thinking, this should not be happening to our team. We should have been better fans.”

Some are holding out hope that this story is not over.

“In my personal opinion, it will come back,” Long said. “A lot of the numbers they said are not true, and it’s been proven they are not true. The whole time it was going on, we wanted to keep it positive. We were not trying to riot or anything. We were just standing up for what we believe in and what we love.”

. Singers Lt. Col. Mike Corrado and John Ford Coley will join the S.C. State Marching Band during the halftime show of the Medal of Honor Bowl on Saturday at Johnson Hagood Stadium. Corrado, an active duty Marine, is known for his song “Stand.” Coley, a Lowcountry resident and half of the duo “England Dan and John Ford Coley” will sing “God Bless America.”

. Events for fans to attend this week include the Gridiron Greats panel discussion Thursday at Seacoast Church in Mount Pleasant. Ticket information is at www.mohbowl.com.

. Former Clemson standout quarterback Tajh Boyd and ex-South Carolina two-sport athlete Bruce Ellington will be at the pregame Tailgate FanFest on Saturday in the stadium’s parking lot from 11:30 a.m. until 1:30 p.m. The duo will meet and greet with fans, take pictures and sign some autographs. There is no admission charge to the Tailgate Fanfest.

. Medal of Honor Bowl chairman Tommy McQueeney said a solid turnout for Saturday’s game is vital for the event’s first year on TV. The game will be shown on NBC Sports Network. Fans have a chance to win a Mercedes Benz at the game, and a donation of $20 will earn fans a chance at a Super Bowl VIP package. See www.mohbowl.com for details.