Former Washington Redskins’ offensive tackle Joe Jacoby and former Buffalo Bills lineman Joe DeLamielleure, a member of the NFL Hall of Fame, have been added to Gailey coaching staff. Jacoby will coach the offensive line’s guards and centers, while DeLamielleure will lead the tackles and tight ends.

Gailey announced previously that he would serve as offensive coordinator and coach the quarterbacks.

The Medal of Honor Bowl, which will be televised live nationally by the NBC Sports Network, is a premier all-star game the features the nation’s top draft-eligible college football players as projected for the NFL Draft. The game honors the Medal of Honor recipients and the game’s beneficiaries, the Medal of Honor Museum Foundation, disabled veterans and wounded warriors.

Jacoby starred as a tackle for his hometown college, the Louisville Cardinals, from 1978-80, and signed a free agent contract with the Redskins in 1981. After working his way through rookie camp, he began a tremendous career that included four Super Bowl appearances, of which Washington won three (XVII in 1983, XXII in 1988, and XXVI in 1992), plus four consecutive Pro Bowl selections from 1983–86.

Along with Jeff Bostic, Mark May, George Starke and Russ Grimm, Jacoby was a founding member of the Redskins’ renowned “Hogs” offensive line of the 1980s and early 1990s, which was considered one of the best front fives of NFL history. The “Hogs” were a mainstay of the Redskins’ glory years during the first Joe Gibbs era.

One year after the Redskins’ third Super Bowl victory in 1992, Jacoby retired. He became an assistant coach at Shenandoah University (VA) and in 2014 was hired as the offensive line coach for Concordia University (IL).

DeLamielleure, a Charlotte, NC resident who was enshrined in the NFL Hall of Fame in 2003, was an All-American and All-Big 10 guard at Michigan State who played for the Bills from 1973-79 and 1985, and also for the Cleveland Browns from 1980-84.

In the 1970s, DeLamielleure and his Bills’ offensive line mates were dubbed the “Electric Company,” because they “turned the Juice loose.” The “Juice,” of course, was Hall of Fame running back O.J. Simpson.

“Joe D” as he was known, was selected in the first round of the 1973 NFL Draft by the Buffalo Bills and captured All-Rookie honors. It was the beginning of a string of career honors that few NFL guards experienced. He went on to become the most honored lineman of the Bills respected front wall. Eight times during his career he was selected first- or second-team All-Pro; seven times he was named first- or second-team All-AFC, and six times he was named to the Pro Bowl. Since 1970, only two Hall of Fame guards, John Hannah with 10 and Gene Upshaw with seven, were named All-Pro more often.

In 1975, the NFL Players Association named him Offensive Lineman of the Year. Extremely durable and dependable, DeLamielleure played in 185 consecutive games during his 13 playing seasons with the Bills and the Cleveland Browns.

A starter from the first game of his rookie season, DeLamielleure played and started in every game for eight seasons in Buffalo before being traded to Cleveland in 1980. During five years in Cleveland he played in every game and had only three non-starts.

Primarily due to the success of the Bills running attack led by Simpson, DeLamielleure was best known for his run blocking. As a swift pulling guard, Simpson became the first player to rush for more than 2,000 yards in a season. DeLamielleure, a six-time Pro Bowl selection who was named to the NFL’s 1970s All-Decade Team, is a member of the Bills and Browns’ Wall of Fame. He received the NFLPA AFC Offensive Lineman of the Year in 1975 and the Forrest Gregg Award for the NFL’s Offensive Lineman of the Year in 1977.

Tickets, which range from $15-$40, may be secured at the Medal of Honor Bowl Game’s dedicated website www. MOHbowl.com. They will also be available at The Citadel Athletic Ticket Office at 843/953-DOGS (3647).

For more information, please refer to our Twitter: @MOHbowl and Facebook.com/MOHbowl 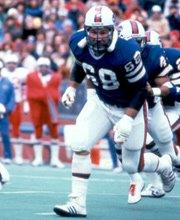