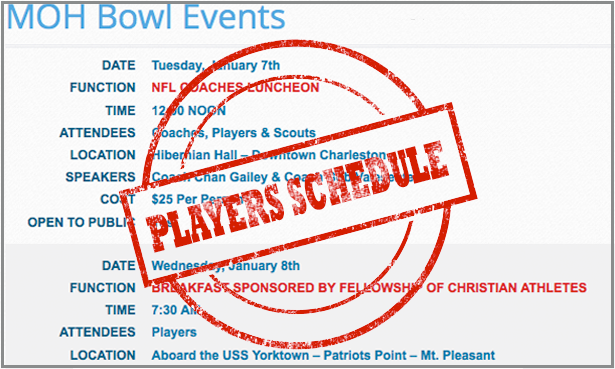 Stay in know with the Medal of Honor Players and their schedule throughout the following week.

Was Joshua Harris from Wake Forest invited to play in the Medal of Honor? I saw Whitlock and Redding were listed but not Harris. Is he playing also? Thanks.

I saw where he tweeted that he had accepted the invitation on Dec. 2 or 5. I was really looking forward to seeing him play. He is an outstanding player. I’ve been following him since he put up 241 yards against Virginia Tech his sophomore year. I know his o line wasn’t very good which made him not get many yards these pass years, but man the talent is there! Anyway, I think more could have been done for him. He deserves to make it to the NFL. Prayerfully he’ll still get invited to the combine. He is really good! You all should check him out! Thanks.

I will pass your information along to the administrator of the event. Thank you.

Is Joe Southwick (Boise State)invited to the Bowl game?

Hello this is my last response, Because I am a follower of Josh Harris sometimes I can send him encouragements or ask him questions and he responds. I told him that I had asked you all why he wasn’t listed as playing and what your response was, he said that he did register, but that he did it through the device on his phone. Well obviously it wasn’t received! That’s why I always say stop trusting these phones to do everything, either use a computer or speak to someone and register for things. What a shame. Not saying the talent that you have is not outstanding, however he would have added to the excitement. Maybe that’s why he was originally invited? Thanks, take care.

Will this game be televised???

The inaugural Medal of Honor Bowl will not be televised this year.

After reading about all the hard & diligent work y’all are doing to make the Medal of Honor Bowl a success, all I can say is well done & wish you the best of luck. May you reach & exceed your benifit goal & set the stage for many more MOH Bowls in the future.

Hank,
Thank you for your recognition. It’s been an honor planning this event in the beautiful city of Charleston.

There will be a chance for fans to mingle with players and request Autographs at The Alley(downtown), Wed, Jan 8th, from 5:30pm to 7:30pm.

Is Denico Autry and Ladarius Perkins from MSU still playing in the bowl and are they on the same team??

Will the game be carried on radio with an internet feed?

The inaugural game will air on SportsRadio 1450 AM. The broadcast will begin at 1:30 pm with the pregame leading up to the 2 o’clock kickoff.