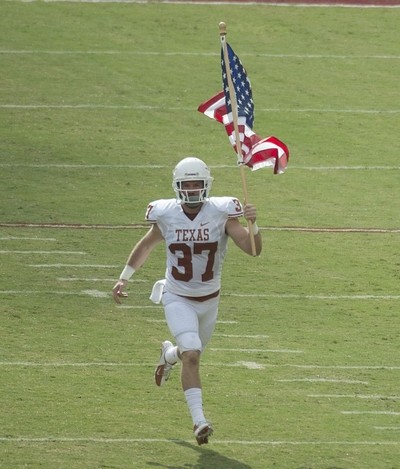 Monday morning during Medal of Honor Bowl week is when the assembled NFL hopefuls are paraded before scouts and personnel experts. The players are measured and weighed and otherwise inspected to make sure they stack up to the demanding physical standards of pro football.

There were more than a few raised eyebrows when Nate Boyer was called to the scales.

“Really?” said Boyer, recalling the reaction with a chuckle. “This guy is a long-snapper?”

Of the more than 100 NFL prospects who will take the field Saturday in the Medal of Honor Bowl at Johnson Hagood Stadium, Boyer is by far the most unlikely.

It’s not just that at 5-10 and 197 pounds, the University of Texas graduate is a few inches and about 40 pounds shy of even the modest standards of an average NFL long-snapper.

There’s also the fact that at 34, he’s about 12 years older than his Medal of Honor Bowl teammates.

And then there’s Boyer’s summer job – Green Beret with the Texas National Guard and the Army’s Special Forces.

Boyer was deployed to Afghanistan over the last two summers, returning to Austin each August in time for football season. After walking on as a safety, Boyer earned a scholarship and the job as the Longhorns’ starting long-snapper, where he never had a bad snap. He learned how to long-snap by watching videos on YouTube, and practiced while he was deployed by snapping a football into a net or at a piece of plywood.

Boyer also saw his share of action on the battlefield. Last July, he was involved in a firefight in Afghanistan as part of a patrol of about a dozen Americans and 100 Afghan soldiers they had trained. Boyer can recall a bullet whizzing by his head, he said in an article by Yahoo Sports.

Before joining the military, Boyer worked on a fishing boat, trained as a firefighter, tried acting and volunteered at a refugee camp in Sudan. That last experience sparked his interest in the military.

During his Army career, Boyer was deployed many times into war zones in Iraq and Afghanistan. The native of Dublin, Calif., was awarded a Bronze Star and was the first recipient of the Armed Forces Merit Award, an award also presented to Clemson receiver Daniel Rodriguez, another military veteran playing in the Medal of Honor Bowl.

“This is a great opportunity for me and all these guys,” Boyer said of the bowl. “This week has meant a lot to me because of my background. It brings together two things that I love, the military and football. I’m always amazed at how much college football embraces the military and veterans.

“I tell these (players) here, they don’t realize what a huge thing college football is to soldiers who are deployed. We watch all the games, even though they are on at five in the morning. We’ll stay up all night to watch college football, if we don’t have a mission. We’ll all huddle around whatever TV we can find and watch.”

Rodriguez’s story was well known to bowl officials Cal McCombs and Austin Atkinson, who put together the rosters for this year’s game. But McCombs was not aware of Boyer’s story until he called a coaching friend in Texas who said, “Do you need a long-snapper?”

Now, Boyer is hoping an NFL team has the same need.

“If I can get an opportunity I will make the most of it,” said Boyer, who already has a job lined up as an intern with a Hollywood production company. “That’s how I live my life, and that’s what I’m into. If someone takes a chance on me, I’ll do everything I can to not let them down.”