All posts in Uncategorized

CHARLESTON, SC – The Medal of Honor Bowl committee has announced the inaugural “Military

Fitness Challenge” that will be held on Saturday, March 25, at Mullet Hall Equestrian Center at Johns

participants may compete in as many events as they desire. All participants with any military experience

will be asked to register for their branch of service.

The event is open to all interested civilians and military personnel. Civilians will be asked which branch

of service they wish to represent. 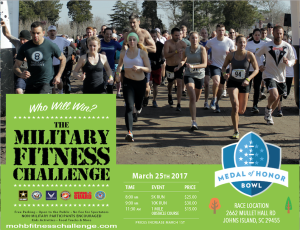 Prices will increase on March 1. Awards will be given by age groups for men and women and for the top three winners in each age group.

Proceeds for the event benefit the Medal of Honor Bowl and its charities.

You are cordially invited to attend the Third Annual True Blue Gala Benefiting The National Medal of Honor Museum Foundation. 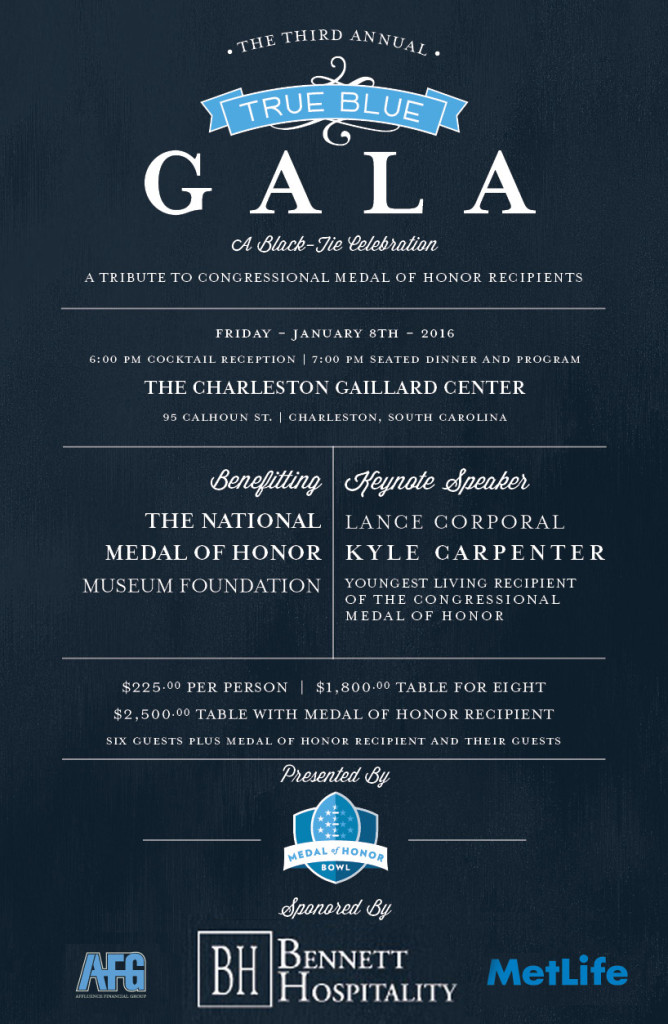 At the Medal of Honor Bowl, the ABCs of what you can see

From NFL prospects to the South Carolina State Marching 101, there will be something for everybody at Saturday’s Medal of Honor Bowl at Johnson Hagood Stadium. Here are the ABCs of what you can see:

A American heroes These guys are the real thing, Medal of Honor recipients who will be honored during pregame ceremonies. The Medal of Honor is our country’s highest military honor, awarded for acts of valor above and beyond the call of duty. Fifteen recipients will be recognized Saturday.

B Bulldogs The Citadel has two players in the game, running back Jake Stenson and defensive end Justin Oxendine.

C Cheerleaders Want to brighten a Medal of Honor recipient’s day? Have him escorted to midfield by an Atlanta Falcons cheerleader.

D Draft picks Last year’s game featured three players who were drafted by NFL teams, and 73 who were invited to NFL training camps. Those numbers are sure to increase this year.

E Ellington, Bruce The former two-sport star at South Carolina, now a San Francisco 49er, will make an appearance at Tailgate Fanfest in the Johnson Hagood Stadium parking lot from 11:30 a.m. to 1:30 p.m.

F Fans A total of 5,135 fans braved a windy, blustery day last year for the first Medal of Honor Bowl. Officials are hoping for at least twice that number Saturday.

H Hall of Famers Former NFL stars working as coaches include Joe DeLamielleure and Paul Krause. DeLamielleure was a Super Bowl-winning lineman with the Buffalo Bills; Krause, a safety with the Redskins and Vikings, picked off 81 passes in his career.

I Issac Blakeney The 6-6, 225-pounder from Duke is the tallest receiver in the Medal of Honor Bowl. He caught 98 passes for 1,093 yards and 12 touchdowns in his career, and might be a good red-zone target.

J Jeffries, Willie The legendary former South Carolina State coach is the head coach of the American Team. He became the first black head coach at an NCAA Division I school when Wichita State hired him in 1979.

K Kicker Ty Long He and punter Hunter Mullins and receiver J.J. Nelson could be the last Alabama-Birmingham players to wear a Blazers helmet during a game. Their program was controversially dropped by UAB after the 2014 season.

L Long-snapper Nate Boyer The Texas player served in the Green Berets Special Forces and was the first winner of the Armed Services Merit Award, given by the Football Writers Association of America.

M Mercedes-Benz One lucky fan will walk away with a Mercedes-Benz CLA250 from Baker Motor Company. You must be present to win, according to contest rules.

O Otis, Norkeithus The 6-1, 235-pound linebacker from North Carolina began the season on the Chuck Bednarik Award watch list, but was hobbled by a hamstring injury for much of the season. A good week would boost his draft stock.

P Purple Heart winner Clemson receiver Daniel Rodriguez won a Purple Heart during his service in the Army in Afghanistan. He was wounded during the battle of Kamdesh in Afghanistan on Oct. 3, 2009, when 300 Taliban insurgents battled with 38 U.S. troops. Eight Americans lost their lives and 22 were injured.

Q Quarterbacks Included among the intriguing prospects are 6-7 Chris Bonner of Colorado State-Pueblo and Ryan Williams, a 6-6, 222-pounder from Miami. Williams was slated to start for the Hurricanes this season before he suffered a knee injury during spring practice.

S Seventies soft-rock star John Ford Coley The Lowcountry resident was half of the England Dan and John Ford Coley duo, famed for hits such as “I’d Really Love to See You Tonight” and “Love is the Answer.” Coley will sing during halftime.

T Tajh Boyd The former Clemson quarterback will make an appearance along with Ellington at the Tailgate Fanfest.

U Uzomah, C.J. The 6-5, 265-pound tight end from Auburn wasn’t targeted much in Auburn’s no-huddle offense, but a solid performance in the Medal of Honor Bowl will boost his draft chances.

X X-factor It could be former Citadel All-American center Mike Sellers. At 6-0 and 265 pounds, Sellers has played H-back, fullback and linebacker in practice this week for the American Team.

Y You That’s right, you could win a Super Bowl VIP ticket package with a donation of at least $20. See mohbowl.com for details.

Z Zernhelt, John The former Citadel head coach is one of the more than 120 pro scouts on hand this week.